07-Jun-2015 : Machynlleth residents get on their bikes in support of paralysed sportsman

From an article in the Powys County Times:- 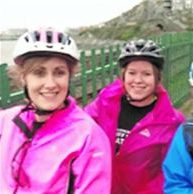 Hordes of Machynlleth residents will take to their bikes in a bid to raise funds to help a man who was left paralysed after a tree fell on him last year.

Talented sportsman Rhys Lewis, 25, was left paralysed after a tree felling accident on his family farm in Henllan farm, Uwch y Garreg, Forge, which crushed his spine leaving him paralysed with limited the use of his legs forcing him into a wheelchair – although he vows to walk again.

His friends at the club came up with the idea to raise funds for the Wales Air Ambulance, Gobowen Hospital’s spinal unit and Apêl Rhys — a fund set up to help Rhys.

“We felt we needed to do something so three of us came up with the idea of the charity cycle and decided to do it,” said friend Charlene Dale, “This included some friends and Rhys’ sister.”

Since then the idea of a charity ride has escalated with 70 people including local residents, friends and hospital staff due to take on the 50-mile challenge next Saturday, June 7, starting in Gobowen and finishing outside Machynlleth Rugby Club.

At the rugby club there will be a family fun day from 1pm with a host of fundraising activities, food and drink for all the family.

Charlene added: “The whole idea has just escalated very quickly and it will be fantastic day, there will be nobody left in Machynlleth I think but those who aren’t cycling can come down to the fun day.

“We have done sponsored t-shirts for the ride with a percentage going to the charities and have made £400 so far from sponsorship forms, so we are expecting to make more than that on the day.”

The 70 cyclists are setting off from Gobowen at 9am completing the 50 miles before regrouping to ride into Machynlleth together, finishing outside the rugby club at around 3pm.

Charlene added: “The 50 miles will be tough and I have refused to go to Gobowen since we decided to do the challenge so that I didn’t see some of the hills we will have to tackle.

“However, we have done a fair bit of training and it is all for a good cause.”