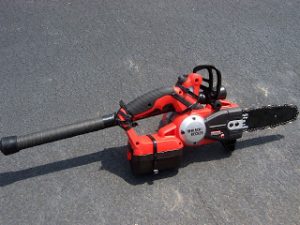 I juggled a live, running, sharp chainsaw for the very first time on Monday morning at Charlie’s in Welshpool.

I was there asking about a battery-powered Ryobi chainsaw which was new on the market.  Dave, who manages the garden machinery department, told me it was a massive leap forward in battery-powered garden technology and it was every bit as good as a petrol model because there was no smelly petrol sloshing around.  He showed me the last one he had in stock and invited me to check it for weight and manoeuverability.  I swung it back and forth in my hand a bit, admiring the pretty shade of lime green of the plastic casing and trying to restrict my swing whilst other people were walking past me in the aisle.  A small child sustained a very minor cut but luckily the chainsaw wasn’t running, so no big deal. I still don’t understand what the fuss was all about.

Dave told me I couldn’t really know how well a chainsaw suited me unless I’d tried juggling with it.  Jeremy said that seemed perfectly reasonable to him, and he sat down to work out how to get the video recorder working on his mobile phone and to log in to Facebook.  A passer-by whispered rather too loudly for my liking that he’d be better off dialling the first two 9’s.

I never thought I’d ever find myself saying this but juggling a chainsaw for the first time is not for the faint of heart, however by then I’d gathered a small crowd and I felt obliged to show willing.  Dave disappeared momentarily to fetch a first aid kit and then he put some artifical grass around my feet not to protect them, but to protect the chainsaw in case I dropped it – unlikely, I know!  Then without any more ado, I tried my first flip.  It worked.  I didn’t kill myself, or anyone else.  (The small child had been dragged away by its mother by now.)  I flipped it again.  And again.  No drops.

Dave figured I’d had more than enough practice and suggested I could probably try it with the chain running.  I might be a half-decent juggler when it comes to bean bags, but I hate running chainsaws at the best of times.  Maybe chainsaws and I just have a love-hate relationship.  But with a little encouragement from Jeremy, or my ‘beneficiary’ as he had suddenly started calling himself, Dave removed the battery, cable-tied the grip safety and the trigger so they were permanently engaged, and handed the implement to me.  I popped in the battery to start it up and with the chain running, I flipped it – and caught it.  I tried again and again.  Then, I dropped it – not on myself, but on the grass.  I stepped out of the way, knowing to respect my opponent.  I picked it up and tried again.  I dropped a few more times, once or twice watching as the saw blade chewed its way through the grass.

It was only at that moment that I considered the very real possibility that the slightest error in timing might see me trying to catch the device by the ‘business end’.  I decided that I’d probably already proved sufficiently that the Ryobi and I were fairly well matched, so Jeremy and I headed for the checkout, debit card in hand.  As we watched the best part of £200 disappearing from our bank account, I could just hear Dave’s voice round the back of one of the display stands talking to a colleague. I strained to hear what he was saying but I could just make out the words, “It’s been a good April 1st.  You’ll never guess what I managed to get the last customer doing…”